A tribute to the heroic failures of Grand Prix racing
https://www.gprejects.com/forum/

I thought I'd improve the Monaco GP as per Lewis Hamilton's comments - yesterday's race convinced me that with current cars at least it is virtually pointless having the cars race each other with the circuit as it is. Apologies if this is quite long but I've had quite a bit of time this morning and thought this up. Also feel free to move it if this isn't the correct forum.

So instead , have them race the circuit and the stopwatch over a series of head to head contests - and apply individual pursuits seen in track cycling velodromes to F1 , with timing starting the moment the cars leave the pit lane /To ensure drivers have an incentive to push at all times , an additional 3 championship points will be given to the driver with the highest average speed in a single match , subject to track limits.

For each match , two drivers will be released from pit lane 12 s apart (to prevent dirty air), then after a specified number of laps for each match if the chasing driver has passed the leader (taking into account the 12 second offset) by the end , they win the match. A coin toss will decide which driver in each match takes the lead role.

The tournament bracket will be defined by WDC position before the Monaco GP . Using this year's championship going into Monaco as an example , with MSC, MAZ, ALO, LAT) being eliminated in qualifying practice (as per real Q1 results). I've put in a prediction as to how it would probably work in practice. 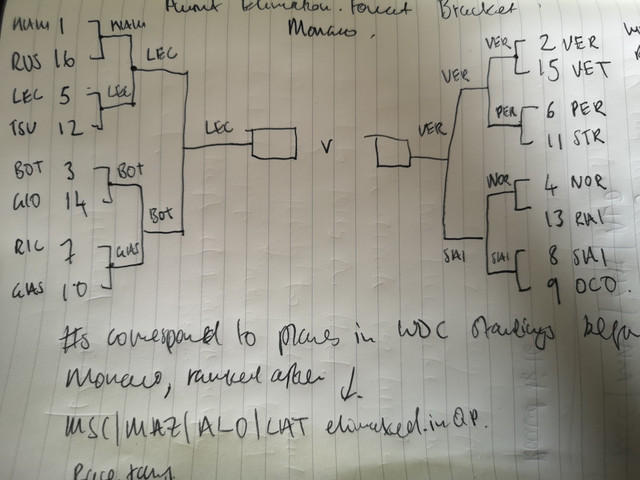 The match can end before the specified number of laps in dry conditions where:

In wet or changed conditions the above do not apply to allow for time lost in pit stops which will be specifically allowed in this circumstance to ensure safety. Instead the match will end before the specified number of laps if :

- either the leader or chase car laps the other driver

Pit stops are forbidden in matches except to allow changes from dry to inter or wet (or from wet to inter or dry) , when a change in climactic conditions is declared will be declared by Race Control. If tyres are damaged due to flat spots and the driver is unable to continue they will be eliminated from the match.

Any other work (to repair crash damage such as changing front wings for example) will result in them being eliminated from the match.

A match will be replayed if it is deemed that a competitor has received damage due to the track condition (puncture by loose drain cover for example) , after the issue is fixed on track.

If a car is deemed unsafe to drive due to damage they will be given a black/orange flag and the driver will be eliminated from the match (steering damage , broken suspension , very loose aero components and a complete loss of a front wing will be slam dunk for this).

For qualifying practice, track limits rules will be as what currently exists , with times deleted if drivers exceed them.

If a driver exceeds track limits where monitored a round in the knockout tournament they will get a black/white flag and their run will be disqualified a from fastest average speed prize.

If a driver received a second black and white flag , this will then become a black flag and be eliminated immediately from the match.

The black/white flags will carry over in to future rounds the driver competes in until the semi-finals where they are wiped clean , like in football tournaments.

Each driver will receive one set of C5 compound slicks, one set of inters, and one set of wets specifically for each round they progress in, which will be only tyres they will be allowed to use in that round.

At the end of each match, and the end of qualifying practice teams will be required to hand back to Pirelli all tyres used for that match/practice session.

For pre qualifying in addition to the above they will get three additional sets of C5 slicks to allow for setup runs and single lap performance.

Between rounds there are no restrictions on setup changes and Parc Ferme will not apply. Teams will have 2 hours time to work on cars between rounds to do work.

This round will be exempt from engine and gearbox penalties and any component changes will not be counted to overall totals for the season to ensure all drivers are able to compete in any matches.

A single Qualifying practice session , essentially the existing Q1 but extended to 45 minutes to select fastest 16 cars over a single lap to go into a competition bracket, and allow teams some practice time for setups.

Round of 16 (eliminated drivers get no championship points) , match length Out lap + 6 complete laps. (10m between matches)

The driver with the highest average speed over a single match without exceeding track limits will get 3 additional WDC points and a trophy to commemorate this.

Constructors championship works as current by adding scores of both drivers.
All times are UTC
Page 1 of 1